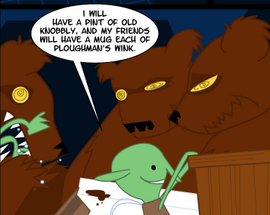 Devil bears are apparently smarter than the average bear, and stronger as well. Their eyes resemble the hypno-coins once advertised in comic books, so they may have some sort of mental powers as well.

A devil bear was brought to the Isle of Wight by Jimi Hendrix in 1970, and ran away while he was performing, staying wild on that island until captured by Hugo, Ryan, and Fallon in 2004.

Some of the Wee Folk mistakenly attended a Devil Bear Beer Festival in 2005, possibly leading to one or more of them getting eaten.

Despite apparently being sufficiently civilised to organise beer festivals, devil bears still do what bears of all sorts are reputed to do in the woods.

Shelley once chose to wear a devil bear costume for Halloween.

Eustace and Esther also encountered devil bears during their stay in Wales. In fact, their infamous first sexual encounter in a caravan in Wales was due to Esther feeling very grateful for The Boy risking his life to protect her from the bears.

Tim Jones's attempt at an energy source, while living in the woods after breaking up with his wife Riley, resulted in the opening of a passageway between nether regions under the control of Mordawwa, resulting in the unleashing of devil bears into the woods near Tackleford.

Retrieved from "https://tackleford.fandom.com/wiki/Devil_bears?oldid=6143"
Community content is available under CC-BY-SA unless otherwise noted.