She has since had a baby, Walt.

First introduced as the receptionist at City Limit magazine, she was ultimately shown to be the daughter of its editor, Len Pickering. Some more information about her early days at the magazine were filled in later in ret-conned "New Bobbins" and "bobbins.horse" strips taking place concurrently with the early strips.She arrived as a troublemaking, rebellious teenager, who had formerly lived with her mother (Stella Chilton, who she received her original surname from; in earlier strips it was unstated whether Len and Stella were actually married, but a newer strip refers to her as his ex-wife) in London until, after Amy was kicked out of several schools, her mum packed her up and sent her off to Tackleford to live with her father. On occasions of exasperation with Amy, Len has sometimes considered packing her back off to Stella, but thinks better of it upon calming down.

She admits herself to having an occasional impulse to "blow my life up and see what was left"[1], leading her to run away to Holland at age 18, and to Oldbourne at 23, but these excursions didn't last; she was soon back in Tackleford.

Amy attended art school until dropping out, which prompted her father to cut her off financially, and she had to find a job. Thereafter, she went through a number of attempted careers before finding her calling in antiques and collectibles; it turned out she had an intuitive sense (which Ryan referred to as "divvy" powers) for what cheaply-obtainable items at thrift stores and flea markets were actually valuable objects if brought to the right market. With some funding from Hugo Rodriguez, she opened a store, "Bric-A-Brac", which was a great success, though she had to endure a smear campaign from rival thrift-store ladies who led an enraged mob to burn down her original store as an alleged brothel; she got the last laugh when she convinced the charity which actually owned the rival store to take it away from the ladies and give it to Amy, where it became the new "Bric-A-Brac" location. (In "The Case of the Forked Road", we see that in that story's alternate timeline, Amy gives up at storekeeping and the ladies run what used to be her store.)

Her long-time store assistant was Melanie Soap, who was a classmate in art school. Melanie later quit to work at the Bank of Burgers restaurant, however. In an alternate timeline, Amy also worked at that restaurant. After Melanie left, Amy took on Shauna Wickle as her assistant (and possibly babysitter).

For many years, Amy has usually been dyeing her hair in a two-toned manner, mostly blonde (perhaps her natural colour, though it's occasionally been more brunette) but with highlights in front (or sometimes to the sides) of some shade of red, pink, purple, or sometimes green (as it now is). She also has a number of tattoos, which she added at various points of her life history (to the disapproval of her father). 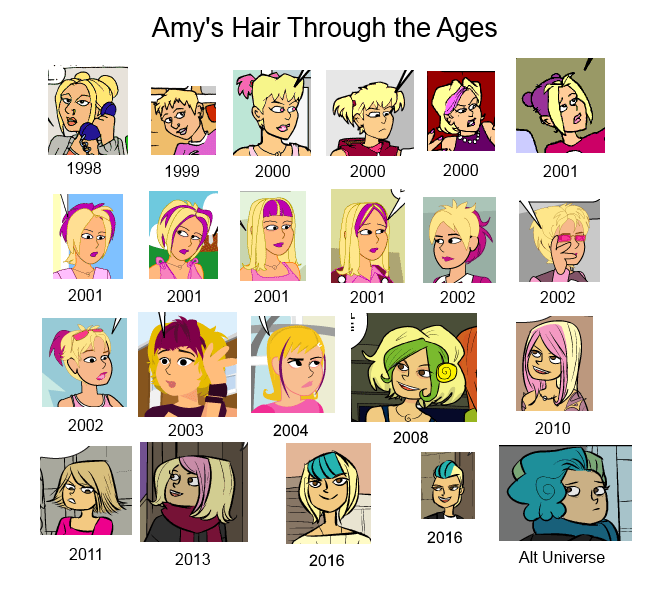 In her younger years, Amy was not very financially responsible; she splurged any windfalls she might get (such as the million pound court judgement she received against TV producer Aaron Spelling for corrupting the youth, which the judge awarded her despite lack of a coherent case due to being lodge friends with Amy's father, and Spelling inexplicably paid up right away instead of appealing), and tended to be broke most of the time unless she could sponge on others such as her father; however, since she obtained business success with her store, she seems to be more responsible at money management.

However, her financial position became more shaky lately after her divvy powers faded out following her becoming a mother; apparently the demands of motherhood left insufficient inner energy to sustain her powers. As a result, the store became filled with worthless junk instead of the valuable finds she formerly came up with, and the last remaining valuable item (a set of Moorcroft pottery) was stolen by Darren Wickle and his friend Romesh Sengupta (who also has divvy powers), so she planned on closing the store once its lease expires, at least until Shauna brought Romesh in as a commissioned worker (who has proven his divvy powers by finding a rare first day cover and a rare vinyl record for Amy). She has failed to learn her lesson about having adequate insurance; the store was no more insured for the burglary than it had been for the earlier fire. Ultimately, she closed the store due to a large increase in rent due to a local real estate boom, and reopened as Chilton Antiquities in a barn outside town.

Amy and Shelley Winters are good friends, and were housemates for a long time. Shelley also was the maid of honour when Amy married Ryan - a very motivated maid of honour even.

Amy's poetry might perhaps be superior to the Vogon poetry highlighted in the HItch-Hiker's Guide to the Galaxy series, but this is debatable.

Retrieved from "https://tackleford.fandom.com/wiki/Amy_Beckwith-Chilton?oldid=6416"
Community content is available under CC-BY-SA unless otherwise noted.